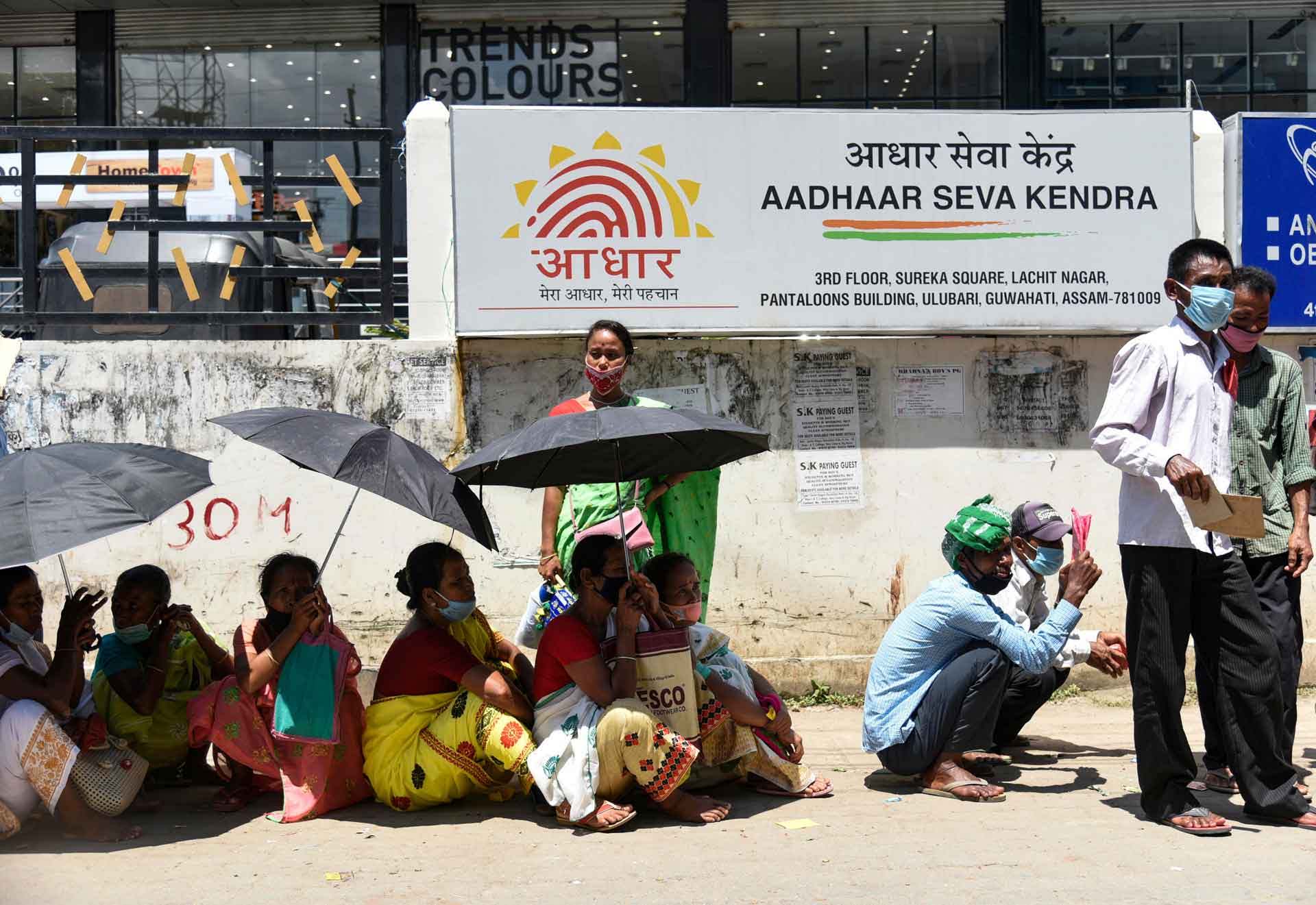 Manoranjan Kumar, once a staunch supporter of the controversial National Social Registry, now fears its misuse by the government

NEW DELHI - The senior bureaucrat tasked with laying the foundations for the Indian government’s controversial Social Registry warned that a centralised, cross-linked database of this scale could compromise the privacy and security of over a billion Indians, but his warnings were ignored, documents reviewed by HuffPost India establish.

The Social Registry, as HuffPost India has previously reported, is intended to automatically track the social and economic lives of citizens — in a bid to continuously estimate their eligibility for government assistance.

However, as work on the registry progressed, Manoranjan Kumar, then the Economic Advisor to the Ministry of Rural Development, realised that such a system could easily be misused by governments.

Kumar asked for the system to have adequate privacy safeguards in place at a time when “the policing system and bureaucracy that is not hesitating to show crumbling morality”. HuffPost India has written to the Ministry of Rural Development and will update this article if the ministry responds.

On November 27, 2015, Kumar penned a concept note describing a National Social Registry—a transformational new way for the Indian state to transparently deliver benefits to the country’s poorest citizens, and assess the impact of government programmes.

Now, five years later, as the Social Registry he envisaged nears completion, Kumar fears that the system, designed with the best of intentions, could instead curtail the rights and freedoms of India’s 1.2 billion citizens.

Documents obtained under the Right To Information Act by data and governance researcher Srinivas Kodali have shown that the Social Registry will be a giant, intrusive database-of-databases that uses Aadhaar numbers to track every aspect of the lives of India’s 1.2 billion citizens.

As HuffPost India has reported: The national social registry will automatically track when a citizen moves between cities, changes jobs, buys new property, when a member of a family is born, dies or gets married and moves to their spouse’s home, and will use Aadhaar numbers to integrate religion, caste, income, property, education, marital status, employment, disability and family-tree data of every single citizen into one giant database.

“I wanted the social registry system to take shape because I wanted transparency in the government’s performance on welfare schemes,” Kumar told HuffPost India in his first public comments on the registry since his retirement in 2019. “I saw some departments and officials were overstating the achievement data on rural schemes. I believed this would stop, and accurate data on welfare delivery will reflect from the Social Registry.”

Yet, the final shape of the registry has left Kumar convinced that implementing it at this current time would hasten India’s worrying tilt towards a police state. The evolution in Kumar’s thinking, from a strong proponent of big-data governance to a cautious sceptic warning of the perils of data centralisation, shows how India’s bureaucracy, which does the crucial work of distilling broad policy directives into nuts-and-bolts programmes, is often unaware of the implications of the Indian state’s new-found embrace of big data.

“I saw India was emerging as a police state. Strong police state. And my belief is very simple that for any country to develop, it should allow more freedom to the household sector and the businesses and impose less control,” Kumar said.

The intellectual impetus of big-databases like the Social Registry is illustrative of a paradigm shift in the Indian state’s views on poverty alleviation. Where the 2000s were shaped by big-ticket schemes such as the Mahatma Gandhi National Rural Employment Guarantee Act livelihood scheme, the Sarva Shiksha Abhiyan programme for education, and the Right To Food Act, the decade that came after was shaped by an obsession with ensuring that the benefits from these schemes were precisely targeted at their intended beneficiaries.

This obsession with targeting, some experts believe, has reached its terrifying logical conclusion in the National Social Registry, where the Indian state is justifying the granular and intrusive tracking of every single Indian resident on the grounds of ever-more efficient targeting of state benefits.

“You have to understand that all that Aadhaar-seeded data is already there available in silos,” Kumar explained in his interview with HuffPost India. “Somebody just needs to write software to aggregate all of it at one place.”

Reetika Khera, associate professor of economics at the Indian Institute of Management Ahmedabad, said that there were two problems with the state’s excessive emphasis on targeting.

“One, targeting benefits takes us away from the idea of our right, as citizens, to public services such as health, education and welfare, towards a narrative around efficiency alone. Two, the possible deceit in the use of ‘targeting’ by the proponents of Aadhaar early on—targeting always meant linking databases for welfare. But welfare surveillance or a “social registry” is surveillance also. The plan to interlink databases was never explicitly stated. Instead, an impression was created that targeted benefits meant that biometric authentication will ensure that the right person only gets the benefits (no one else can claim your benefit),” she said.

This doublespeak, she said, was necessary to keep fears of surveillance at bay.

Going by the official record, Manoranjan Kumar was once one of the strongest proponents of the Social Registry. Apart from writing the concept note in 2015, he also led the Rural Development Ministry’s deliberations with a Parliamentary Standing Committee and a high-level expert committee, and coordinated with other union ministries, the World Bank and the NITI Aayog to get the necessary approvals and the resources to get the project off the ground.

Amongst the dry language of the Indian bureaucracy, Kumar’s passion for the project shone through.

“We asked for a challenging assignment. It has been granted,” he wrote in a note in November 2015. “We need now a homegrown SECC based social registry where the programme belongs to the government of India and where on certain spoke we invite the expertise of multilateral organisations including the World Bank.” The SECC, or Socio-Economic Caste Census, serves as the foundational database for the Social Registry.

Kumar was actively involved in the project all through 2016, but in 2017, he seemed to develop misgivings.

In a routine note on March 15, 2017, on the status of his ministry’s conversations with the World Bank on implementing the social registry, Kumar slipped in a few sentences that betrayed his rising alarm.

“We should be looking for a Social Registry System that attends to the privacy concerns too, especially with the policing system and bureaucracy that is not hesitating to show crumbling morality and with very often their movement leaving dark shadows of corrupt practices,” Kumar wrote, before continuing with the minutiae of government business. He also pointed out that the US’s Social Security System worked at this scale because it had “the highest privacy concerns attended efficiently”.

No one responded to Kumar’s observations on the file.

Meanwhile, the Indian Supreme Court was hearing a clutch of petitions on the right to privacy, even as the Modi government was issuing directive after directive to compel Indian citizens to sign up for Aadhaar and seed their unique ID numbers to a host of discrete government databases.

At the time he wrote the note, Kumar subsequently told HuffPost India, his concerns about the misuse of Aadhaar were growing.

“Today if you go to deposit money, seek refund or pay fee in cash in a hospital for a serious patient, every time your Aadhaar is demanded and questions are raised about you. They are all doing the policing work,” Kumar said. “In such a situation, Aadhaar is a really dangerous instrument. It carries so much information. And technology is such that nothing is secret.”

“Imagine, today some SHO (station house officer) has access to some biometrics. There is a public pressure on him to solve his crime. What will he do? Implicate someone. With that kind of situation, keeping biometrics and using them so often is so dangerous. That was the purpose of writing that note,” he added.

In August 2017, months after Kumar noted down his misgivings about the Social Registry’s potential for misuse, the Indian Supreme Court delivered its judgment on the right to privacy.

Profiling individuals through “automated processing of personal data” to “analyse or predict certain personal aspects” such as “performance at work, economic situation, health, personal preferences, interests, reliability, behaviour, location or movements”, the Supreme Court said, was “a form of surveillance”.

“Such profiling can result in discrimination based on religion, ethnicity and caste,” the court added.

As HuffPost India reported previously, the government initially explored ways of building the social registry without Aadhaar, but ultimately decided to amend the Aadhaar Act instead. If these changes are implemented, privacy advocates have warned, it will render the court-mandated safeguards on Aadhaar meaningless.

“With no law in place to regulate government’s use of citizen’s personal data, a live database like the Social Registry can be misused by the government in innumerable ways,” says Kodali, who accessed the social registry file notings using the RTI. “Any political party in power with access to this data can create voter profiles and do gerrymandering to essentially change constituencies so that their party or their socio-economic group can only come into power in any elections,” he warned.

No faith in the system

Now in his retirement, Kumar believes that India’s faltering institutions are ill-equipped to deal with the fallout of a centralised system like the Social Registry.

“I would not implement it until other systems around it are reformed in a way that there is symmetry and justice for citizens,” Kumar told HuffPost India. “First go and review the CrPC, according to which your fingerprints are the evidence of your presence. Improve the data security in the government. Improve the capacity of the courts. Then you implement this kind of system. Otherwise it can only be misused by the state.”

His time in government, Kumar said, had shaken his faith in the institutions meant to act as a check on the power of the government of the day.

“State’s rights cannot be better than my rights. It has to be balanced,” he said. “But I strongly believe that individual freedoms are important and it is only democracy that allows individuals equal footing as the state.”