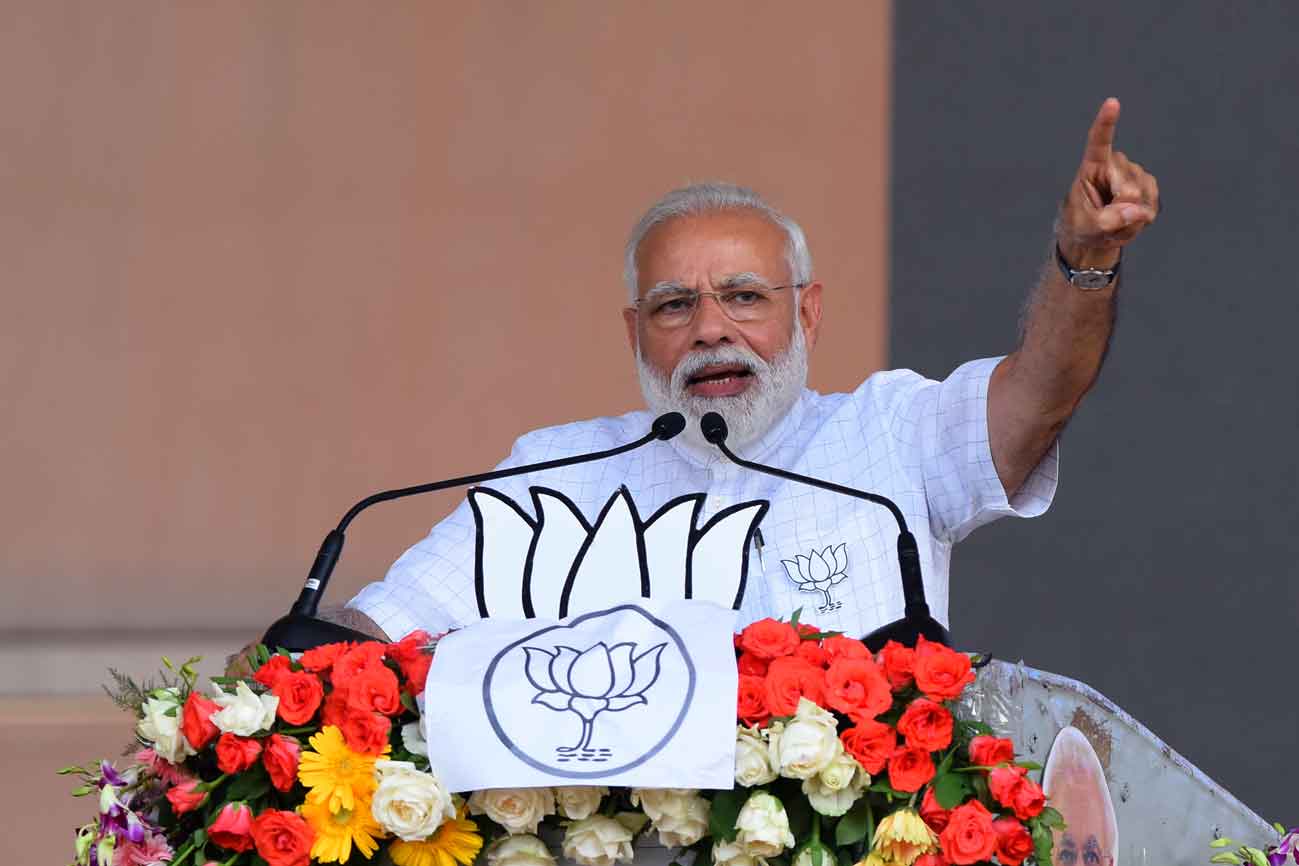 Soon, Prime Minister Modi’s office ordered that these rules be broken to allow for an illegal sale of electoral bonds. This was first justified as an exception and then made into a practice.

The electoral bond scheme, implemented over the fervent objections of the Reserve Bank of India, the Election Commission of India and India’s opposition political parties, legalised the influence of big business in India’s elections by providing them and others a route to secretly donate to parties and opened the doors for offshore money to pour into Indian politics.

First announced in Arun Jaitley’s 2017 budget day speech, the bonds offered complete anonymity to donors. The donor would not need to divulge the source of funds and the political party would not need to disclose who it got the funds from. Another change, implemented at the same time, removed limits on election funding by corporations— meaning they could now funnel as much money as they wanted to the parties of their choice.

To this end, in January 2018, the government specified four 10-day windows in January, April, July and October each year when the State Bank of India (SBI) would sell these bonds to donors. The rules also allowed for an additional 30 days sale of electoral bonds in years when a general election was scheduled.

These state elections — in Karnataka, Chhattisgarh, Madhya Pradesh, Mizoram, Rajasthan and Telangana — were the last round of polls before the Modi government’s first tenure ended, and were expected to set the political narrative for the 2019 General Elections in which the BJP eventually trounced its rivals.

But in the first ever sale and donation of bonds in March 2018, BJP garnered 95% of all political donations made through this particular funding channel, shows the party’s annual report. Data is not yet available for funds that BJP or others got through electoral bonds in the run-up to assembly elections during the financial year 2018-19.

The PMO’s intervention to open extra windows for political donations via electoral bonds is significant because the limited sale periods were intended as a precaution against money laundering. As HuffPost India has reported, the Reserve Bank of India had initially recommended that the bonds only be sold twice a year for a short duration.‍

The rules for electoral bonds were broken at the first given opportunity. SBI was supposed to sell the first tranche in April 2018, but the first round was opened a month earlier in March 2018 instead. Rs 222 crore worth of bonds were bought in this round, with 95% going to the BJP.

The following month, in April 2018, SBI opened another window for political donation — in this, bonds worth another Rs 114.90 crore were purchased and donated. But the government was still not satisfied.

With the Karnataka state elections due in May 2018, the PMO instructed the finance ministry to open a special and extra window of another 10 days.

To be sure, the PMO did not explicitly link its request to impending polls in Karnataka, but finance ministry officials caught on to the link.

An officer in the finance ministry noted that the extra window period was being asked by the PMO in the run-up to the assembly elections.

He drew attention to the fact that this was not allowed under the current rules.

“Para 8 (2) of the notification regarding Electoral Bearer Bonds issued on January 2, 2018 however, refers to the elections only for the House of People (Lok Sabha),” Vijay Kumar, deputy director in the department of economic affairs handling the electoral bond scheme, wrote in internal file notings on April 3, 2018. “This would imply that additional issuance of Electoral Bearer Bonds cannot be meant for state assembly election.”

The rules, Kumar wrote in his April 3 2018 note, did not reflect the “intent” of their draftsmen, and that the bonds had always been meant to be used for both Lok Sabha and State Legislative Assembly elections. He said this “omission” needed to be rectified.

His suggestion was shot down by the secretary for economic affairs, the topmost bureaucrat in the department, S.C. Garg, who said the observation was incorrect.

“This special issue was meant only for Lok Sabha. If we were to open a special window for assembly elections as well, there will be several special windows, sometime, in a year. No need for amendment,” Garg wrote on April 4, 2018.

A week later, on April 11, 2018, Kumar sought to make explicit the contradiction between what the rules said, and what Prime Minister Modi’s office wanted.

“PMO desired to open a special 10-day window for issuance of electoral bonds,” Kumar, the deputy director, wrote to his superiors. “However as per para 8(2) of the notification on electoral bond Scheme, dated January 2, 2018, an additional 30-day window could be specified by the Central government in the year of the general elections to the House of People. At this stage, such a special window with general elections to Lok Sabha far away, may not be in consonance with the wordings of the notification.”

This was the first time officials put down in writing that the instructions had come from none less than Prime Minister Modi’s office.

In Indian bureaucratic practice, even instructions directly from the Prime Minister are referred to as those from the ‘Prime Minister’s Office’ on government records.

At the mention of the PMO, Garg, the secretary of economic affairs, quickly fell in line and reversed his position.

On April 11 itself, he wrote a note to finance minister Jaitley, where he said the electoral bonds were allowed to be issued only four times in a year that elections to the Parliament are not to be held.

This, he said, was done “as the electoral bonds are bearer bonds, it was considered safe and adequate that only four windows in a normal year should be provided to make political contributions through electoral bonds for ensuring that these bonds are not used as a currency.”

This, as mentioned earlier, had been done after warnings by the RBI.

Yet, Garg then suggested that finance minister Jaitley break the regulations that the Union government had approved and notified just four months ago in January 2018.

“In view of the requirement, we may, as an exception, open an additional window for the period of May 1-10, 2018,” Garg concluded.

Garg left the nature of the “requirement” unspecified, but Jaitley signed off on the exception anyway.

The finance ministry in its files claimed that this illegal sale of electoral bonds just before Karnataka assembly elections, on the instructions of the PMO, was being approved as an exceptional case.

But a spate of critical assembly elections were scheduled at the end of 2018. Breaking the regulations governing electoral bonds would become a habit for the BJP government. The finance ministry told HuffPost India via email that it would not be able to provide detailed responses to specific questions because it was busy preparing next year’s Union Budget, but said that all the decisions were taken “in good faith”.

“All the issues raised in the email are on the policy decisions taken by the then respective competent authorities. In this context, it may be mentioned that in the Government organisations all the decisions are taken in good faith and in the larger public interest. Interpretation of decisions taken may have different perspectives, hence an appropriate explanation may only be given, after taking into consideration all he aspects factored into the decisions making process,” said the finance ministry.

The Prime Minister’s Office did not respond to queries.‍

With elections scheduled in November and December 2018 for Chhattisgarh, Madhya Pradesh, Mizoram, Rajasthan and Telangana, the same deputy director Vijay Kumar, on October 22 2018, moved a proposal to his seniors for another special window to sell electoral bonds in November 2018, ahead of the assembly elections. This time, he did not say where the instructions came from, but made clear the purpose of these instructions.

His note made clear that the BJP-led Union government had decided to treat May 2018’s “special” but illegal window as a precedent to be followed.

To quote from Kumar’s October 22, 2018 note: “In view of the forthcoming State assembly elections in five states and as per the directions, additional 10-day special window for issuance of Electoral Bonds is proposed, on the analogy adopted at the previous occasion of issuance of electoral bonds through special window during May 1-10, 2018 by the government in view of state assembly elections in Karnataka with the approval of the finance minister.”

Both Garg and Jaitley signed off without hesitation. Rs 184 crore worth of electoral bonds were bought by donors from SBI in this phase, and given to political parties.

What was initially a one-off illegal breach of regulations in May 2018 under orders from Prime Minister Modi’s office had been institutionalised by his government as practice by the end of the year. By May 2019, more than Rs 6,000 crore worth of electoral bonds had been sold and secretly donated to political parties. If the first tranche of bonds sold offered any lessons, it is likely that the party in power, BJP, garnered most of the money.‍

This is the third part of #PaisaPolitics, an exclusive HuffPost India investigation into how the Modi government brought untraceable funds into Indian politics.